One down, eight to go.

I promised that I would tell you the story of how the princess, otherwise known as Izzy came to be mine, or rather, how I came to be hers! 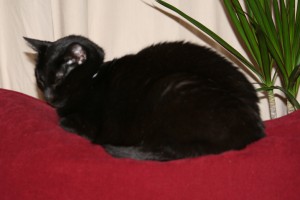 She lived on our estate, belonged (and I use the word loosely here) to a family that lived opposite us – but from a very young age, almost day one in fact, she was kept outdoors, all her meals were given to her outdoors (which frequently meant she had to fight off the other neighbourhood kitty’s) and no matter what the weather was doing, she was denied the luxury of a warm, safe, dry home.

Personally I had never understood the point of them having her in the first place, I mean, surely if you get an animal, you want to interact with it more then just to stuff a food bowl under its nose twice a day?

Me, being soft as I am, couldn’t stand to see such a small creature out in all weathers, and it wasn’t long before (despite the strict “no pets” clause in my rental agreement) I was encouraging her to come in to my home for a little while now and again for some comfort and company. I was good, I never fed her – I would never feed any animal that I knew belonged elsewhere, and when she asked to go back out, I never refused her, no matter how much it tore at my heart to watch her slink out into the foul weather once more.

I was often found outside, playing with her, making a fuss of her, and talking to her – she seemed to enjoy the contact as much as I did, and regularly came running over when she saw me come home from work, or follow me to the bus stop of a morning to purr around my ankles till my bus came.

She also took to darting inside whenever the door opened, much to the annoyance of my then boyfriend who would then spend his morning trying to catch her and put her out before he left for work too. One particular day, he was running late, and she refused to go back out, hiding in out of reach places so he couldn’t persuade her. There were some leftovers from the night before’s supper on the side, which he had forgotten about in his rush to get out to work. I got home before him, and opened the door, went upstairs and saw a trail of pastry crumbs up the stairs, confused, I followed them, to discover a very sleepy little black bundle of fur curled up in the centre of my bed, with the remains of what had been a very tasty looking chicken and ham slice on the covers around her.

It wasn’t till I started to giggle that she cracked open an eye, yawned, stretched, chirped as if to say “so, you’re home now huh” and came over to headbutt my hand by way of thanks for her bed and board for the day before jumping with her customary thud from the bed and trotting downstairs to ask to go out. I nervously searched the house for mis-haps but much to my relief, there wasn’t a single puddle or pile to be found.

It was with a heavy heart I watched the family pack up and move, knowing that my time with Izzy was running out, but hoping that they would finally start to treat her like part of the family (not that they had shown any inclination in the 18 months I had known her). At first, I missed seeing her around dreadfully, I missed our interaction, despite me being friendly with several other cats in the area, but as the days went by, although I still missed her, the weight lifted somewhat.

About six weeks after they moved, after several weeks of severe weather, I was coming home from work in the dark, not really paying attention, lost in thought, when I rounded the corner to my front door. It was only when I heard a tiny squeak (she still hasn’t learnt to miaow properly) which was instantly familiar that broke me from my thoughts. Peering closer into the dark of my lawn, I saw a very thin, very sad looking little black cat – her third eye-lid mostly over her eyes, and generally in a very poor state.

I called her and she came over, warily nuzzling my hand before skittering off again, the weeks since I had seen her hadn’t been kind to this small waif. Hurriedly I unlocked the door, and tried to call her in out of the rain, she sat, looking longingly at the warmth just in her grasp but too afraid to trust the offer. I was at a loss, what had possibly happened to this confident, carefree little cat to make her so timid.

I ran up the stairs to my kitchen (it was one of these fancy maisonettes with most of the rooms on the second and third floors) and started rooting through my cupboards for something to offer her, all the time calling to her down the stairs and hoping she wouldn’t run off before I got back down to her.

Snaring up a tin of tuna, and a bag of those pre-cooked chicken bites, I hurried back to my front door. At first I couldn’t see her, but then came the same sad little squeak, and I crouched down, tearing open the chicken. It didn’t take long for her nose to start twitching, she was obviously very hungry, and gradually she came to me for the food.

My boyfriend came home, and hopped off his bike, and she ran. I sighed softly, loosing her quickly in the dark. He apologised and offered to go look for her when I explained what had happened. I refused the offer, hoping she would come back of her own accord now she knew there was food here. Over the next week, I repeated the same steps, most days she was waiting for me, or when she wasn’t the local kids (who knew she was back and without anyone to care for her) would knock and tell me where she was. I would go to her, feed her, talk to her and coax her near to home.

One night about a week after the first time she arrived on the doorstep I was feeding her titbits at the door when my boyfriend came home. Seeing what I was doing and giving me a resigned look, “Well,” I said defensively, “I can’t just leave her…”

He smiled, agreed, and snuck past us to go upstairs, leaving me to continue feeding her and tempting her nearer and nearer the door. When she was within reach, and seemed to be a bit calmer, I gently swung her up in my arms, backed through the door and kicked it closed.

At first she was nervous, but she soon found the chair and curled up to doze. While she was sleeping I snuck over to my friend’s house to beg some cat litter from her, I explained the situation and she was only to happy to donate some for me.

The setup wasn’t very sophisticated, an old Avon box lined with a black bag was her litter tray that night, and I shut her in the kitchen as I wasn’t sure she knew where the box was before I went to bed. She howled and howled to go back out, completely confused that this was now her home, I hardened my heart and ignored her, telling her softly that it was for the best this way.

It was a long night, and the start of a fairly rocky couple of weeks for us, but also the start of a life long bond that exists between us, something really special. But dear reader, I have taken up enough of your time for one blog – there is plenty of time for me to finish the tale for you, and many others to share with you too – so for now, I will say “until next time”