Sadly, although we might wish otherwise – no one and nothing lives forever, on these pages you will “meet” some of those who have gone before us to Rainbow Bridge, and although they are not by our side, they are constantly in our hearts – gone, but never, ever forgotten. 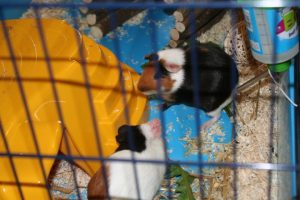 This pretty pair Patch and Nibbles – technically they were John’s – a belated Valentines Present. In this picture Patch has her back to you and Nibbles is the one facing you. This was them as babies, over time they had other friends to play with who you will meet here also. They were born somewhere around the end of April 2010 and sadly departed to the bridge in XXXXXXX , Nibbles was the first to leave us, we suspect to some sort of congenital heart condition, and sadly Patch followed her just days later, she simply didn’t want to survive without her sister, despite our best efforts. 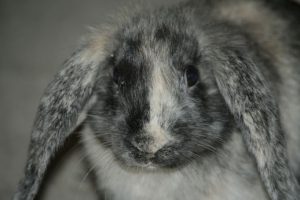 This pretty girl is Brambles, she was technically a dwarf lop rabbit, but no-body told her the meaning of dwarf. She was a real character, like most of her siblings and has left us with many happy memories, some of which we will share in the blog in time, she had a devoted partner, Jasper, who we got for her after our move to North Wales. We got her Aug 2010, and sadly departed at Easter 2015 due to complications from ongoing dental issues, just weeks after she lost her Jasper to the bridge, so we suspect there was more than a little heartbreak involved.

This little pair are Mungo and Jerry (Mungo is the siamese sable at the back, and Jerry is the grey nearer you), the first of a continuing line of gerbils who own a piece of my heart. When we went to get these guys in XXXXX, it was Jerry I saw first, and he had an attitude, nibbling the girl at the store – I was sold, most would shy away from one that had a bit of an attitude, but for me he was adorable. They “de-clanned” after Jerry developed a respiratory infection, but lived happy, if separated lives until we lost them to the bridge in XXXXX. 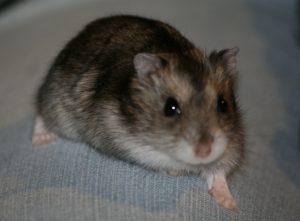 This is Aleksandr, one of the first two Campbells Russian dwarf hamsters that won my heart. Originally, we looked at some little Robinski hamsters, but they were just too fast for me, escaping both me and the lad showing them to me. We decided to look at a slightly slower, more docile, option and he got this little guy out for me to hold. It was love at first cuddle, and the rest is history. We brought them home in XXXX and sadly lost him to the bridge XXXXX.

We had to separate them fairly soon after bringing them home as Alek turned into a bit of the thug and would pick fights with Sergei who sadly got sick due to the stress of it. 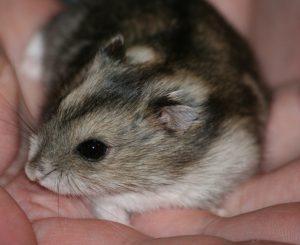 This is Sergei. After cuddling his brother Aleksandr for a little while, and deciding to bring them home, I asked for this sleepy little guy too (at the time, we thought it would be company for his brother, which it would have been if Alek hadn’t been so dominant). We continued to make friends in the car on the way home, with him disappearing up my sleeve for a cuddle while John popped into Tesco’s. Sergei went through a lot in his little life, as you can see if you read our blog, but he still managed a long and happy life until he passed over the bridge XXXXX. 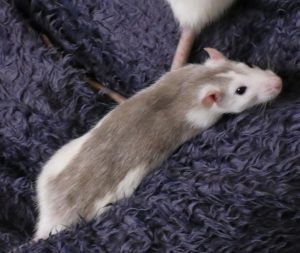 This lovely little girl is Lola, she is one of three rescue rats I said hello to when I collected Sergei and Aleksandr. Being rats, and as one of her sisters was half blind, they had been given very little interest. I have had rats before and know what loving pets they can be. I had a cuddle with her, and told them that I would need to see if I had room for them and if I did I would be back for them the following Tuesday. When I went back on the Tuesday, one of the three (Jasmine, very similar markings to Lola) had been rehomed, leaving these two. Undeterred, I took them both home. 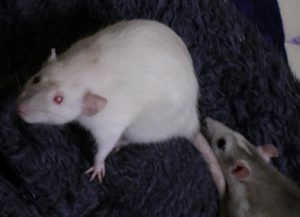 This is Tess – sister to Lola and one of the main reasons they were so hard to rehome as she is half blind. Most Albino animals have poor sight anyhow, but poor Tess has completely lost the sight in her left eye. Far from making her nervous and hard to handle, she is a complete sweetheart so long as you talk to her when you go about picking her up. Both Tess and Lola love having cuddles, and frequently curl up on my shoulder and go to sleep. Tess is probably the more adventurous of the two, despite her handicap.

This section is for the ones that were too shy to have their pictures taken, but still deserve a place on the page as they were still very much part of our lives, and our hearts.