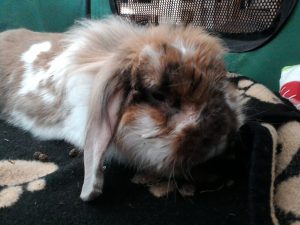 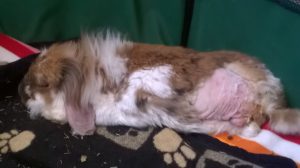 This story is from Feb 2011 but I think you will find it amusing and it has taken me a little while to see the funny side of it ;) When someone asks you what were you doing last night, most sane people would look confused and say sleeping, or maybe they will blush and look away coyly – however, you wouldn’t expect them to say “turning my house upside and walking the streets” – this though, was precisely what John and I were doing for an hour and a half in the wee hours of the night in question.
We had just introduced Izzy to the wonder that is a cat flap, she loved this idea as it allows her to go in and out as she pleases during the day, without having to rely on her notoriously mean “pets” to open the door for her. We also love it as it keeps some of the precious warmth we are fighting so hard to create in the house, even if to start with, we had to prop open the cat flap so her highness didn’t bang her delicate nose when entering or leaving her palace.

Now, we both decided that during daylight hours the cat flap will remain open, but at night, we would lock her in – we have too many nightmares about how the morning might come when you mix small, not very bright, black cats with dark, twisting Welsh country roads. On the whole, after a few “you gits, you shut the magic door” miaows and looks, Izzy accepts this too and will find somewhere warm and snug to spend her evening.

So, back to this particular night where, late afternoon, she wandered in for her normal, “you still here?” check and John locked the cat flap, we progressed with our evening and a good time was had by all. Then comes bed time, I go through the usual lock up routine, adding checking that the cat flap is still locked to it (hey, you never know, she might have worked out what bit to turn to open it) and then head upstairs to check the smallest members of our family, Izzy on my heels.

When I get into what we shall call the “Rodent Room” as it is where all the small fry live, my evening started to get a bit urm, “interesting”. Sergei and Alek had been fighting like cat and dog for the few days previous, and though I had left them to it hoping that it was just dominance squabbles that they would sort out for themselves, I had made a point of checking daily to make sure no serious damage has been done to either of the combatants.

This night, as I was doing this check I noticed that Sergei (who was very much the smaller, more timid of the two) was looking more then a little stressed, his coat on his tail end looked greasy, he was distressed and any time anything moved near him he would rear back in submission squeaking.

Well maybe I am too soft, but I decided enough was enough, especially when as I was watching Alek initiated another unprovoked attack on his smaller brother. John went down and fetched the small carrier we have on hand for emergency vet trips, put some sawdust in it and brought it and a shallow bowl (ok, a nutella jar lid) upstairs.

Gently I put Sergei in there, with some food, bedding and water, promising him that it was for the best, that at least here he wouldn’t be picked on. It was a hard choice, because although they fought viciously, they did seem to make it up and curl up again together in the end.

Once he was settled, I ran downstairs to check quickly for symptoms of wet tail – a nasty, often fatal, illness that can be brought on by stress. Although he had the matted fur, that was the only symptom that fitted (although I called the vet to get their advice, just in case).

Relieved, John and I headed back upstairs to bed. We had been laying there awhile, when in all innocence he asks “Where’s Izzy?” – the reason behind this is that normally, once the rounds are complete and we have settled down, there is a soft thump and our feet are suddenly unable to move, a routine that was absent.

“Good question, I guess I better make sure I haven’t shut her in with the little ones” I replied, and duly got out of bed to go check the rodent room for feline interlopers. No sign of her, so I started checking the other rooms as we closed most of the doors to conserve heat, calling her, narda, not a whisper.

Now this is a very unusual situation, normally me calling her will gain at least a chirp of recognition, so I wandered downstairs in my tee-shirt, and started checking the downstairs rooms, nothing…. By this time, John has also got up and is helping me hunt, knowing I won’t sleep till I know where she is.

Heart in my mouth, I go and check the cat flap, certain that I have checked it, and it was locked, but that “just in case” doubt was starting to flower in my mind. It was locked, so I returned to searching the house, calling, and offering bribes to try and get a response, still nothing. By now I was starting to get a bit upset, and John and I were going back over the evening, comparing notes on when we had last seen her, when we last had the door open, etc.

Having both searched the house, twice, to no avail I go back upstairs on leaden feet and start to get dressed. As I think it was Sherlock Holmes once said, “once you have checked all the possible, it is time to check the impossible!” – Logically we both knew she couldn’t have got out, but we couldn’t find her in the house…

I did two circuits of the house, calling like an idiot, checking under bushes, rattling treats, even wandered down the lane to see if she was down there, no small cat, I came back in, and started turning the house upside down again, while John, watching my growing distress took over looking outside despite my protests he should go back to bed.

While he was outside, I even checked the rabbit hutch, despite her being terrified of Brambles, just in case… such was my desperation at this point. It was on my dozenth check of the spare room I suddenly spotted that one of the wardrobe boxes we moved with had its door slightly open. Hope flared in me, I moved the boxes around it to be able to look inside, and who should be curled up, sound asleep on one of my old coats in the bottom of the box, blissfully unaware of the tears and tantrums she had caused, but the demon cat herself.

As if that wasn’t bad enough, the look of “do you mind I am trying to sleep” she gave me had me almost to the point I could have happily throttled her if I hadn’t been so relieved about finding her safe and well. It was with many tears (of relief this time) that John and I finally headed back to bed, cursing the softly snoring cat in the box.

Moral of the story, when searching for a cat, ALWAYS check the boxes!!